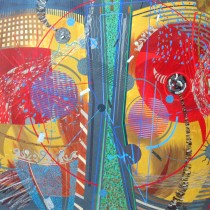 An exhibition of paintings by the late Chapel Hill artist Robert Barnard is now at the Betty Ray McCain Gallery at the Progress Energy Center for the Performing Arts in downtown Raleigh.

A reception for the show, organized by Lee Hansley Gallery, is planned for Feb. 4 from 5:30 until 7:30 p.m. at the McCain gallery.  The public is invited.

Twenty large-scale symbolist abstract paintings comprise the exhibition.  The works by the former University of North Carolina art professor were executed between the years 1971-1998.

Barnard, who died in 2010, was a native of Northampton, England.  He migrated to the United States in 1958 to attend UNC where he earned a masters in art and where he taught art education, painting and ceramics.  He retired from the art department in 1989.

Barnard was one of the original artists in the stable of Lee Hansley Gallery when it opened in 1993.
Solo exhibitions of Barnard’s work have been held in Chapel Hill, Raleigh, Durham, Greensboro, Carrboro, Lexington and Swannanoa in North Carolina.  His works have been included in shows at the North Carolina Museum of Art, the Southeastern Center for Contemporary Art in Winston-Salem, the Fayetteville Art Museum and the Green Hill Center for North Carolina Art in Greensboro.

Nationally his works have been exhibited at the Corcoran Gallery of Art and the Kennedy Center for the Performing Arts in Washington, D.C., the Art Exchange in Hot Springs, Ark., Jeffrey Neal Gallery in New York City and the High Museum of Art in Atlanta.

Internationally Barnard’s works have been shown in Paris, The Netherlands, Koln, Germany, and  Colchester, England.

The exhibition at the Betty Ray McCain Gallery will remain on view through Feb. 29.