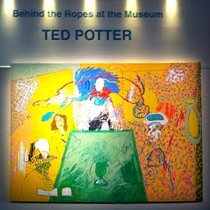 Ted Potter is most identified with the Southeastern Center for Contemporary Art (SECCA) in Winston-Salem where he was director from 1967-1991. During Potter’s tenure there the center blossomed from a small public gallery in cramped quarters in a Colonial house in Old Salem to a major regional art center. Under his leadership the nonprofit art center relocated to the James G. Hanes English country estate near Reynolda Village where it became a major force in contemporary art in 13 Southeastern states and the District of Columbia. While at SECCA Potter is credited with creating two artist grant programs. The Southeast Seven was a program through which seven artists from the Southeast annually were awarded grants that resulted in an traveling exhibition. The national Awards in the Visual Arts (AVA) doled out ten $15,000 grants annually to artists from ten regions of the country based on artist per capita population. A major component of the AVA program was a traveling exhibition that went to three major American art museums and ended up in New York City each year of the ten years of the life of the program. It was a photograph from the AVA series of exhibitions that sparked what is known as “the art wars” of the late 1980s. Potter suddenly had the national spotlight thrust upon him as a defender of an artist’s right of free expression. Potter was not known primarily as a painter due to his high profile as an arts administrator at SECCA followed by stints at the Atlantic Center for the Arts in Florida, the Contemporary Art Center in New Orleans and his finale post as associate professor and director of the Anderson Gallery at Virginia Commonwealth University in Richmond. But all those years he made art. Much of his work was collage but he returned to painting in the 1980s. In this exhibition there is one early painting for 1986 and two others from 1996. It was one of the paintings from 1996, Yellow Dimension, that led to the creation of a whole series of paintings making light of the museum world, a world he knew intimately. The main body of this exhibition contains those paintings where Potter has created stereotypes of the people he has encountered over the years in his work. Through the paintings, Potter is poking fun at the people behind the scenes at museums in an attempt to encourage them not to take themselves too seriously.

Potter was born in Springfield, Kansas, in 1932 and he earned a BFA in painting from Baker University in Baldwin, Kansas in 1954.  He studied art at the University of Kansas in Lawrence in 1957-58 and went on the University of California at Berkeley in 1959.  In 1961 he earned his MFA at the California College of Arts and Crafts in Oakland.  It was the late Philip Hanes who brought Ted Potter from San Francisco to Winston-Salem.  Phil and Joan Hanes attended an art exhibition, “Flower Children’s Art Bag,” put on by the Glide Memorial Church in the Tenderloin section of San Francisco in 1966.  They were so taken with the show that they asked to meet the organizer of it.  That person was Ted Potter.  And in the style of Phil Hanes, he asked Ted on the spot to come to Winston-Salem to run what was then the Gallery of Contemporary Art, later to become SECCA.  Ted, who was working in a men’s clothing store at the time, said “yes,” and the rest is history.