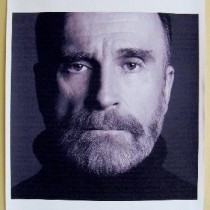 Frank Faulkner, a respected and well-known painter and interior designer, died after a brief illness on September 17, in Spencertown, New York.

Faulkner, a former curator at the Southeastern Center for Contemporary art in Winston-Salem studied art at the University of North Carolina at Chapel where he earned his BFA in 1968 and his MFA in 1972. He proceeded gallery owner, Lee Hansley, as a curator at SECCA. While at SECCA, Hansley orchestrated a major commission by Faulkner at the Equitable Life Assurance Society of the United States in Rockefeller Center.

Frank is known principally as a pattern painter employing low relief in his works. Influenced by his Hudson River Valley surroundings, he was also an accomplished drawer of landscapes and subjects from nature.

Faulkner’s work was shown for years at the Monique Knowlton Gallery in New York City.

Faulkner was born in Sumter, South Carolina on July 27th 1946; however, he always identified himself as a North Carolina artist.

His work has been included in over 40 solo exhibitions and more than 30 group exhibitions in the United States, Germany and Belgium.

There will be no memorial service.