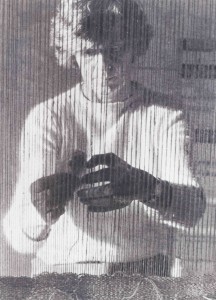 DURHAM – Fiber artist Silvia Heyden, a native of Switzerland who spent most of her life in Durham, died here Monday afternoon.  She was 88 and died from complications resulting from a recent heart surgery.

“Silvia Heyden was the leading fiber artist in North Carolina and one of the most important tapestry weavers on the East Coast,” said Lee Hansley of Lee Hansley Gallery in Raleigh.  “She redefined and modernized the medium of tapestry,” he added.

Heyden has been represented by Lee Hansley Gallery since it opened in 1993.

Heyden’s works are in scores of collections in the United States including the North Carolina Museum of Art and the Gregg Museum of Art in Raleigh, the Mint Museum of Art in Charlotte, Wake Forest University in Winston-Salem, Williams College in Massachusetts, The Crocker Bank and Bank of America in San Francisco, The Equitable in New York City among others.

Her tapestries are in numerous public collections in Europe where Heyden enjoyed an extensive and successful exhibition career.

“Silvia prided herself in weaving diagonally as opposed to confining herself to a grid.  She freed herself from the tight struction of centuries old traditional weaving,” Hansley noted.  “Her tapestries read more like abstract paintings.”

She was a close friend and colleague of the late Edith London of Durham and last year Hansley organized a large exhibition at the Durham Arts Council entitled “Together Again” which featured paintings and collages by London commingled with tapestries by Heyden.  “Heyden would enter her fiber works in painting competitions and would always be accepted in those shows,” Hansley added.

Heyden was born in Basel, Switzerland, in 1927.  She graduated from the School of the Arts in Zurich where she studied under the famous designer Johannes Itten.  She moved to Durham in 1966 when her late husband, Siegfried Heyden, was hired as a professor of medicine at Duke University.

Heyden is survived by two children, Franscoise of Durham, a teacher at the Friends School in Chapel Hill, and Daniel, an architect in New York City. 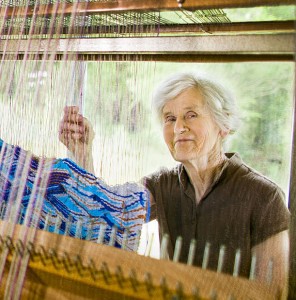