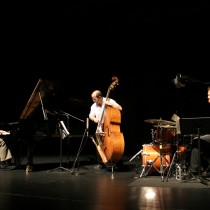 On Sept. 21 Stephen Anderson will be performing with

the Stephen Anderson Trio at the Lee Hansley Gallery in Raleigh

Stephen Anderson, director of jazz studies and composition teacher at UNC, is a critically acclaimed composer and pianist whose music has been published on 14 compact discs. Four of Anderson’s recordings have appeared on the Grammy Awards ballots representing Summit Records.  Both the Stephen Anderson Trio Nation Degeneration and Forget Not albums received 4½ stars (out of 5) from the All Music Guide, and Forget Not was nominated best jazz “Debut CD” (3rd Annual Village Voice Jazz Critics Poll 2008).  The Dominican Jazz Project was listed in the “2016’s best Latin/Brazilian jazz recordings”.
Previously, Anderson was pianist with the Lynn Seaton Trio (2000-03), the famed North Texas One O’clock Lab Band (Lab 2000-01), was winner of the Lionel Hampton Jazz Festival piano competition (1997), and keyboardist for gold-recording country artist, Kevin Sharp (1996-97).

Anderson  holds a D.M.A. from the University of  North Texas (2005) and served as assistant professor of jazz piano at Western Illinois University (2003-2005).

Anderson’s trio appears frequently at jazz venues in the Triangle.  He has developed a loyal following of jazz enthusiasts who appreciate his deliberately aggressive approach to the keyboard.  “This performance is not to be missed by lovers of jazz,” said gallery owner Lee Hansley.

The concert is free but contributions to pay the musicians will be graciously accepted.

Quotes from the Press:

“The pocket he plays in is precise and intense, whether he imposes alien forms onto his pieces or simply thwarts the expectations of rhythm and harmony…there is no question of the beauty in Anderson’s playing…”

“Anderson…creates new music and improvisations that are full of life, energy and fresh ideas. Highly recommended.”

…Quest…composed by Stephen R. Anderson, establishes a method of creating a four-part texture by just two instruments. This, to my ears, is the most innovative work on the CD, and is really quite striking in its originality.

Isaiah is a powerful work, full of colors both vivid and, at times, pastel. The audience received this premiere performance with enthusiastic applause, with good reason.

…one of the bright stars of the contemporary scene.

…full of creative energy and the joy of musical discovery.

—Mark Sullivan, All about Jazz (review of the Dominican Jazz Project, Summit Records)

…“an exemplar of the scholar-musician.”