DURHAM — A major exhibition of 75 works by tapestry artist Silvia Heyden and painter-collage artist Edith London is now on view at the SunTrust Gallery of the Durham Arts Council. Lee Hansley, owner of Lee Hansley Gallery and a friend of both artists, is the exhibition curator. 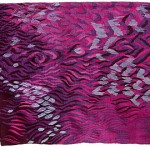 Titled “Silvia Heyden & Edith London: Together Again,” the show makes reference to the bond the artists had through their respective artwork. Edith London died in 1997 at age 93. Heyden is a healthy 88 and still working daily at the loom.Both women arrived in Durham through similar means. Edith’s husband was hired in the physics department at Duke and Silvia’s husband was hired by the medical school. Though Silvia, who is Swiss, is a generation younger than Berlin native Edith, the two were united by the German language and their keen interest in art. They became instant friends.At first Edith did not consider tapestry an art form; she categorized it as a handcraft. Through her long association with Silvia, however, she was won over and realized that they faced the same formal concerns in producing their work, regardless of the medium.Over the years the two women were in numerous exhibitions together, but this show is the first featuring a large body of work by both artists. All works by London are from private collections while most works by Heyden are courtesy of the artist.Both artist have been represented by Lee Hansley Gallery since it opened 1993. Gallery hours at the Durham Arts Council are 9 a.m. to 9 p.m. Tuesday through Saturday and 1-6 p.m. on Sunday.