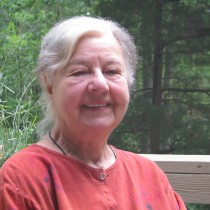 One of the original seven artists that premiered when Lee Hansley Gallery opened in 1993 has died.

Lilo Kemper of Durham died December 6 at her home. She was 94.

Lilo had befriended gallery owner Lee Hansley prior to the gallery’s inaugural exhibition. They shared a mutual friend, painter and collage artist Edith London, also of Durham. The gallery’s second exhibition was a two-person show of Lilo’s raku pots and paintings by Michael Smallwood of Washington, D.C.

Lilo’s second career was in ceramics. When she was facing retirement from Duke University where she worked in the pathology lab, she launched another phase of her life as a potter. She studied privately in Franklin County and at the Craft Center at N.C. State University prior to beginning a 25-year period of exhibitions.

Her work was featured in 12 solo and group exhibitions at Lee Hansley Gallery, including a comprehensive retrospective exhibition with catalogue in 2010. She also exhibited her work at the former Center Gallery in Carrboro, the Craft Center at N.C. State, at Cedar Creek Gallery in Creedmoor, the Durham Art Guild, the former ERL Gallery in Winston-Salem, the George Watts Hill Alumni Center at Chapel Hill, at Galleries America in Carrboro, at the Horace Williams House, at Duke University Museum of Art, the Raleigh Fine Arts Society, Meredith College Art Gallery in Raleigh and West End Gallery in Winston-Salem. 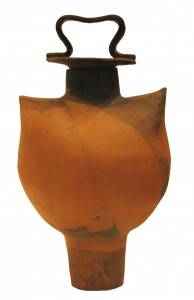 Large lidded pot by Lilo Kemper from the collection of Ben and Margaret Williams.

Lilo was deeply interested in classical music and was frequently in the audience of music and dance concerts in the Triangle. She was elegant and dignified and dressed with a contemporary flair. Her appearance always defied her age.

Lilo (Lieselotte) was born on June 16, 1920 in Deutsch Krone, Germany (now Walcz in Poland). She and her two younger siblings, Gerhard and Christa, spent their childhood in Potsdam, Germany, where Lilo completed her education at the Lyceum for Girls. Unable to pursue her interest in arts and crafts because of the outbreak of World War II, she studied at the Lettehaus in Berlin, graduating in 1942 as a technician for chemistry and biology and then worked in Munich. After the end of the war and the division of Germany, she moved her mother and siblings from what had become Soviet-occupied East Germany to Munich in American-occupied West Germany.

Persuaded by her brother who had migrated to the United States, Lilo moved to New York in 1955 where she worked as a research assistant in the Laboratory of Neuropathology, The New York Hospital and Cornell University School of Medicine. In 1961, Lilo accepted an invitation from Duke University to work as a research associate in neuropathology, retiring in 1985. She proudly became an American citizen in 1994.
In retirement Lilo returned to her childhood passion for arts and crafts.

She is survived by her brother, Gerhard Kemper, of Johannesburg, South Africa, two nieces: Jessica of Luderitz, Namibia, and Nina of Linz, Austria, and two nephews: Boris of Salzburg, Austria, and Florian of Munich, Germany, and eight grandnieces and grandnephews.

Gallery owner Lee Hansley said of Lilo, “She is one of the most dignified people I’ve ever met. It was a joy knowing her and introducing her work to the gallery’s audience. Her artistic vision was peculiar to her and the result was a body of very creative work that was both original and beautiful. She was immensely creative and was always progressing in her output. No two pots are the same by Lilo. Each embodies her yearning to express herself in the medium of clay.”

A limited number of catalogues from Lilo’s 2010 retrospective at Lee Hansley Gallery is available without charge at the gallery at 225 Glenwood Ave., Raleigh.