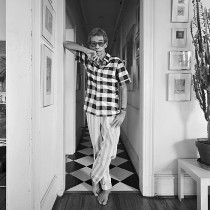 Marking the Centennial of His Birth

Claude Flynn Howell, known as simply Claude in North Carolina art circles, was born in 1915 in the Carolina Apartments on Market Street in downtown Wilmington, and he died in the bed he was born in in the same apartment building in 1997. Claude was and remains one of North Carolina’s most celebrated and collected artists.
He was a firm believer in painting what you know, a philosophy that defines his career as a painter and educator. He chronicled his surroundings, both people and places, his entire life as an artist. His favorite locations were the Wilmington and Wrightsville Beach areas and the island of Ocracoke. The works in this exhibition are prime examples of Claude’s interest in imagery and his philosophy of painting familiar surroundings.
Claude had no degree in art, though he founded the art department at the University of North Carolina at Wilmington. He was awarded an honorary doctorate in the humanities from Wake Forest University in Winston-Salem. In 1930 he studied with Elizabeth Chant and Irene Price in Wilmington. He also studied with Charles Rosen in Woodstock, New York, and was influenced greatly by the artist Robert Gwathmey of New York.
Claude’s first career was as a clerk/typist at Atlantic Coast Line Railroad in Wilmington. He worked there for twenty years prior to starting the art department at UNC-W.
Claude’s work was exhibited widely in North Carolina and he was one of the first living artists to have a retrospectvie of his work at the North Carolina Musuem of Art in 1975, an exhibition which traveled to the Southeastern Center for Contemporary Art in Winston-Salem and to the Mint Musseum of Art in Charlotte. A second comprehensive retrospective of Claude’s work was organized by the St. John’s Museum of Art (now Cameron Art Museum) in 1995 and it traveled to three other museums in the state.
Claude traveled the world extensively and was known for his quick wit. He chronicled his life by writing detailed diaries which he illustrated with pen and ink drawings. He also compiled a 4×5 card collection of the history of art in the world, a project he continued until his death.
This exhibition, organized by Lee Hansley Gallery, honors one of North Carolina’s most important artists of the 20th Century and commemorates the centennial of his birth.